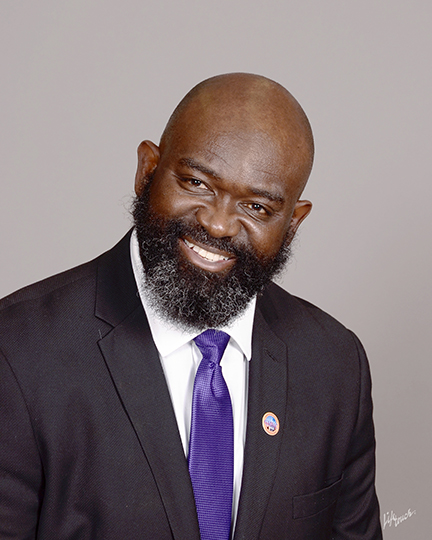 Rev. Dr. James D. Jackson is currently the Senior Pastor of the Goodwin Memorial Baptist Church (GMBC) of Harrisburg, PA.   Before becoming the Pastor of GMBC he was an Associate Minister at St. Paul Baptist Church in Bethlehem, PA, under the late Marshall E. Griffin, Sr. Rev. Dr. Jackson received his ministerial license in September 2004.  He was ordained into the gospel ministry in October 2007.

Rev. Dr. Jackson, was an active member of the Pennsylvania State Baptist Convention(PBSC), having served as Treasurer, and he also served as the Treasurer and Vice-President of the Central Region of the PBSC Clergy Ministry.

Dr. Jackson received his undergraduate degree (BA) in Psychology from the University of Maryland, College Park. He did his graduate work at the University of Kansas where he received his Master’s and Ph.D., in Cognitive Experimental Psychology with a concentration in Gerontology. In 1992, at the age of 24, Dr. Jackson was one of only two African Americans in the nation to hold that degree. Dr. Jackson recently graduated with a Master of Arts Theological Studies at Moravian Theological Seminary, in Bethlehem PA.

Dr. Jackson is currently an Associate Professor in the Department of Psychology, at Kutztown University, Kutztown. He is also the Co-Director of the Achievement Initiative for Male Success at  Kutztown University. Additionally, Dr. Jackson is on the faculty of the Wesco Evening College at Muhlenberg College, Allentown Pa, where he serves as a Professor of Psychology.

He is a Co-Author of two psychology text books entitled: “Understanding Psychology” and “Charting the Human Development: A Life Span Perspective”.

He is a member of Alpha Mu Nu Chapter, Omega Psi Phi Fraternity, Inc. He is a member of the Prince Hall Free and Accepted Masons of Pennsylvania Wyoming Lodge #135 and the Order of Eastern Stars Virginia E Holland #86.

Rev. Dr. Jackson is married to Lisa A. Jackson, they have one son Ezra D. Jackson