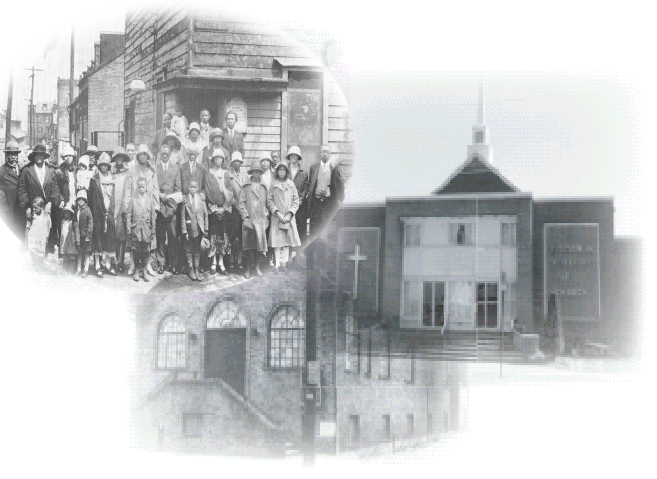 “A Church Blessed To Be A Blessing”

The Goodwin Memorial Baptist church was organized as the UNION BAPTIST CHURCH on April 19, 1929 by a small group of Christians who had separated themselves from the Mt. Olive Baptist Church. The first church services were held in the home of Bro. and Sis. Henry Jackson at 633 Broad Street.

The following Pastors served faithfully through the years:   Rev. William T. Sneed (1929-1930) was called as the first pastor. After a month the membership increased by ten.  In June 1929, land was purchased at Cowden and Broad Streets.

Rev. William Wanamaker was called in 1930 and served until his death in the same year.

Rev. James F. Goodwin was called as the third Pastor and served from 1930 until 1946.  The property at Cowden and Broad Streets was paid for under Rev. Goodwin’s administration.

In June 1946, after the death of Rev. Goodwin, the Union Baptist Church, having a deep emotional and spiritual attachment to him, voted unanimously to have the Church name changed to Goodwin Memorial Baptist Church.

Reverends Hiram Askew and William Talley served as supply pastors until Rev. R. L. Adams was called in 1947.  On June 20,1947 the Church was incorporated under the laws of the Commonwealth of Pennsylvania.

Rev. B. L. Warren was called in 1948.  A building fund was started under his administration. While construction of the foundation and basement was underway, services were held at Rev. Clark’s Church on Cameron Street and Rev. Matthew Bank’s Church at Currant and Broad Streets.

Upon completion of the basement, Goodwin moved back home and held Sunday school, worship services and Wednesday night prayer meetings; many people in the Harrisburg area referred to it as the “Underground Church”. The membership was between fifty and seventy-five.  In 1954, the church moved upstairs to the Sanctuary.  In that same year, Rev. Warren resigned.

For a year our church was without a Pastor.

A Pulpit Committee supplied the pulpit.   Rev. Lenworth S. Morrison was called in March 1955 as the sixth Pastor of Goodwin. Our Church membership was approximately one hundred and twenty-five. He instructed the Church that our first and foremost goal was to “Win Souls for Christ.”  Early in his administration the mortgage was paid in full.  He appointed Deaconess Catherine Thompson as  “Mother of the Church” and he instituted tithing by asking each member to try tithing one Sunday a month.  Rev. Morrison, with the cooperation of Rev. Henley, monitored and coordinated the purchase of Camp Central.

Mrs. Jennie Morrison, the first lady, represented Goodwin in many community organizations as well as the local, state and national Baptist organizations.  She worked tirelessly with the youth choir, Sunday school, BTU and prepared youth for the Elk’s Oratorical Contest.

In the latter part of 1959, the Harrisburg Redevelopment Authority purchased the property at Cowden and Broad Streets.  The congregation of Greater Zion Baptist Church offered their Church for choir rehearsals, funerals, prayer and baptismal services; our worship services were held in the gymnasium of the YMCA on Forster Street.

April 1962, the building at 332-34 Kelker Street was purchased and became our next church home.  A rear extension and a Baptistery were built.

In 1965, the cornerstone was laid, and the membership was approximately two hundred.

On June 27, 1976 we began to broadcast our worship services to WHP Radio listeners.   In 1976, a new church building was purchased at 2447 Green Street.  On December 18, 1977 we moved into our present home.  A broadcast system was installed which enabled our church to reach out through a telephone ministry.

In 1978 -1979 the Goodwineers, a club for young men, the Young Adult Missionary Circle, Nursery Club, Men’s Choir and the Young Adult Sunday School Class were formed.  Our Youth/Young Adult Council started our first newsletter called the “Messenger”.  After our move to Green Street, our congregation grew to over four hundred members.  On July 9, 1979, less than two years after occupancy in our new church home, the mortgage was paid in full.

A fifteen-passenger van was purchased in 1983 to provide transportation to church for senior citizens and students from Messiah College.  A Board of Christian Education was established and the first Members Handbook was distributed.

From 1983 to 1988 the:  Drama Committee, Men’s Club, Layman’s Club, the Tape Ministry, Video Committee, Food Service Committee and the Hospitality Committee were established.

On May 26, 1991, after a two-year search, Rev. Rosendo A. Watson was called as our Pastor.  In that same year a parsonage was purchased.  In 1992, the auxiliary names were changed from clubs to ministries.  The following support ministries were instituted in 1992:  Singles Support Group, Women’s Fellowship, the Christ-Centered AA Group (currently RASPA Ministry) and the Praise Ministry.

On November 5, 1993, Rev. Watson resigned.  Rev. Irvin Kittrell was called to assist us.  He often reminded us:  “O Taste and see that the Lord is good, blessed is the man that trusted in Him” (Psalm 34:8).  The church went into a period of prayer, fasting and preparation.

Rev. Alfred E. Smith became our pastor December 4, 1994.  Rev. Alfred and First Lady Clementine Smith came to us with many gifts from Gravel Hill Baptist Church of Richmond, Virginia.  From 1995 to the present time Goodwin continues to grow with the help of Almighty God and the visionary leadership of Rev. Alfred E. Smith.  The emphasis over the last few years has been to implement the theme:  “A Church Blessed to Be a Blessing”.

Pastor Smith’s vision for Goodwin is to continue to expand our efforts as a Community Church, strengthening and rebuilding families both within our Church and the Community. His vision includes:

   The Family Life Center to provide outreach family programs.
   Alfred E. Smith Self-Esteem Award to recognize deserving youth for the purpose of citing outstanding achievement in our church, the school or community.
   Monthly “Focus Word” to enable each family to have a specific biblical word to study during the month.    A “Purpose Driven Church” process which places 39 individual ministries in six major divisions.
   Leadership Academy established to train present and future leaders of our church.
   Each month, members 65 years of age and older are given a $50 monetary birthday gift from the church in the month of their birth.
   The Educational Academic Achievement Challenge was established to provide encouragement and support for family members, economic incentive to our youth and a church based tutorial program.

In 1997 Goodwin purchased two mini buses to meet the transportation needs of the congregation.  The Chapel in our Church building was dedicated in the honor of Rev. Morrison and named “ The Rev. L. S. Morrison Chapel.”

Our congregation voted to purchase the Eastern Star Building, located at 2430 N. 3rd Street, for future expansion of our services to our membership and our outreach to the community.  The building was purchased in July, 1998 and dedicated on December 19, 1999 as the Goodwin Family Life Center.  The mortgage was paid in full December 2003.

In April 2003 two new ministries were established, The Senior Citizens Advocacy Ministry and the Civic and Social Justice Ministry.  Reverend Dr. James D. Jackson became the interim Pastor in July 2008, and was installed as Pastor on November 15, 2008.

Under Rev. Jackson’s leadership the membership in the church has increased and a new youth ministry has been established.  The Young Adult Ministry in Service “YAMS” began prior to the loss of our Sister Ciera Grant, one of the very active young adults.  The members of the Ministry voed to continue in the name of Ciera.

The Associate Ministers Ministry has tripled to twenty-two under Rev. Jackson’s leadership.  From that group, we had our first Hispanic Minister and our first Pastor Elect.

Several new committees and/or ministries have been established and numerous new outreach projects are underway.  A new class offering taught by one of our Associate Ministers, Path to Ordination, is available to internal and external ministers.

We continue to strive to be a beacon of light for the community and those in need.  We have expanded our foreign missions.  In 2012 we provided financial assistance to Haiti.  2012-13 we provided school supplies to the Kaiyaba School in Kenya and donated funds to dig wells for clean, fresh water and continued to support the wells into 2014.  Current efforts for 2014 are to provide funds to support education in Sierra Leone.

The physical facilities have undergone some improvement.  In 2011 the exterior of the Family Life Center was repainted and the parking was expanded.  At the church building, new windows and window wells were installed in the basement, repaved the parking lot, and added additional handicap parking.  In 2012 a radon test system was installed in the basement.  In 2013, we sponsored twelve children for the Saint Barnabas summer camp.   We obtained a new bus and paid off all existing loans.

In 2017 Pastor Jackson and First Lady Lisa and Rev. Minnie Jackson traveled to Bangkok with the Baptist World Alliance.

In 2018 we revamped the entire sound system in the church adding a state of the art system with visual screens.  In addition to the new sound system, we remodeled the entire sanctuary from ceiling to floor with new lighting, new carpet and new pews.  We also purchased our first digital display Marque outside of the church.

Our Church has grown physically, economically and above all, spiritually.  We must continue to be “A Church Blessed To Be a Blessing” in His Name and to His Glory.